The following is a relaying of events, which took place when I was 15. It is a completely one-sided tale and it is altogether possible that some details have become “stretched” with time; except for what happened in Plymouth, the day the photo was taken— 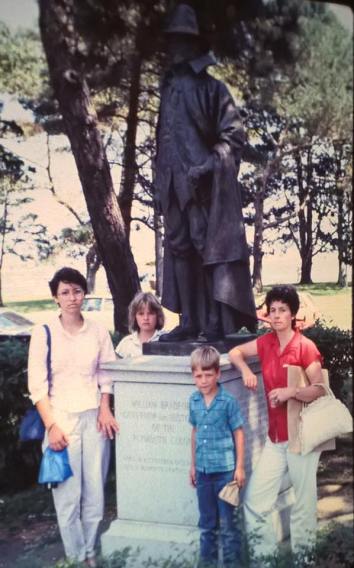 It was 1985 the year Coke changed their formula and released new Coke, Microsoft released the first version of windows, windows 1.0, the single “We Are the World” was recorded by a charity in Hollywood, California for Africa, and “The Power of Love” hit the radio waves. But if you asked me what happened in 1985 I would tell you about our family vacation that summer. Years later that vacation would become the most talked about vacation at family gatherings and campfires.

The second week of July my brother, sister, and I sat in the back seat of a silver ’77 Oldsmobile Cutlass Supreme headed toward Massachusetts. Air conditioning wasn’t a thing when the Oldsmobile was built so we rode with the windows down. We siblings slouched on the black vinyl seats sometimes leaning against the little triangle side window or turning around to watch the road out the back window. The long forgotten lap belts were buried in the crevice of the back seat. Dad who wasn’t fond of pop music usually found Garrison Keillor on the radio or some old time country music. It was difficult to hear the music above the sound of the wind from the open windows. The radio would often lose reception and many miles would pass before dad realized we were listening to “fuzz”.

I would stare out the window at the clouds overhead or the changing scenery. Sometimes I put my hand into the wind and would dip my arm in swooping motions against the pressure of the wind or I would stick my face out, close my eyes and let my imagination take me on adventures.

Our first stop was somewhere on Cape Cod and dad found a cute motel that looked like a long cottage with many doors. Once we were settled into our room we siblings ran outside to look at the stream behind the hotel or to see what was in the vending machines near the front office. I was mortified when after clogging the toilet in our room, dad sent me to the front office, all by myself, to retrieve a plunger. The walk of shame across that parking lot with a plunger in hand felt like a mile. Maybe that was the first hint of trouble on this ideal vacation.

We spent the next day at a beach on the bay side of the Cape. My homemade red swimsuit sagged slightly when the cold waters of the bay soaked it. My head, neck, and mid arm to finger tips were tanned and the rest of me was white. The white parts of my skin would be red by the end of the day.

Near the end of the week my dad pointed the car toward Plymouth and things began to fall apart. Every hotel in the Plymouth area was full. The “no vacancy” signs glared red into the dark night as we drove along. Finally dad headed north toward Boston. The worry lines on my mother’s forehead were increasingly visible. It was hours past dark when we dragged ourselves toward an elevator at the end of a hotel building. I remember standing under a parking lot light and staring up at the multi story building in front of me. This was no cottage. It was beautiful and grand looking. Our room was on the 9th floor. As soon as we were in the room I walked to the window to see the view but not for long because we were all very tired. The next day was the one I had been looking forward to, our visit to Plymouth. I planned on waking up early so I could curl my hair.

The next morning we woke up late, or at least I did. I had to look perfect. My favorite outfit had been saved for this day. I had a grey pair of pants with white and pink pin strips and a pink blouse with white pinstripes that fluffed out from the waist in a peplum. Dad was already packing the car with our things and I had barely started curling my hair. I could hear him expressing his impatience to mother and I could hear her reminding him that we still had a ½ hour.

It was common knowledge in our family that when dad set a time to leave he would always want to leave ½ hour before the time that had been set. It was a point of constant contention with his teenage girls who needed every available minute to perfect their hair or press their clothes. Finally I was ready quite a few minutes after everyone else was ready.

Once we were all in the car, Mother gave us some canned tomato juice and a snack for breakfast. The rest of the day was spent touring. I had little camera bag strapped across my chest with a 110-film camera I had received for Christmas last year. I had dreamt about seeing Plymouth Rock and getting a picture of the rock on an isolated beach with the sun outlining the top corner. Plymouth rock was my biggest disappointment. We walk up a paved ramp to a covered patio and looked over a railing at a rock sitting on sand at the bottom of the cage. On the top of the rock was stamped 1620, the year the Pilgrims arrived in Plymouth. I couldn’t touch the rock, there was no isolated beach, and it turns out the whole think about the pilgrims stepping on the rock was a legend not based on facts. I snapped an obligatory picture and walked away with my family.

It was warming up outside, the sun bearing over us as we took a break on a bench facing the bay. My stomach growled and I realized it had been awhile since we had our tomato juice and snack for breakfast. We had walked past several restaurants. I noticed my parents looking at posted menus but we never stopped. The store windows were full of beautiful clothes and items from brands I had never heard of with price tags beyond my imagination. We didn’t know it at the time, but our fancy hotel had soaked up food money for the day, and Plymouth was very expensive for a family of 5. So we walked, and walked and walked. Tourist shops beckoned the few last dollars my sister and I carried with us. I was feeling hungry and cranky and so was the rest of the family. We were literally dragging our feet. Then it happened.

In the store window of a candy shop we saw a large box of salt-water taffy. It looked so good and my parents had enough cash for taffy. We sat on the bench near the bay again and shared the box of taffy. We devoured the entire box. With renewed energy we ventured into a free museum with air conditioning. By the time the tour was finished our energy from the candy had worn off and we were all slumping down into a sugar low. But dad had one more thing on his list. We had to see the statue of William Bradford and have our family picture taken next to it. By this time we were complaining quite a bit. We were past done for the day. When we reached the statue we propped ourselves up on the cement edges of the base of the statue and looked toward dad’s camera. He told us to smile. I thought we did but there wasn’t anything left in us. We were about to collapse. Dad put his camera away and we silently walked back to our car.

The drive home to Pennsylvania was difficult. My brother threw up while we were stuck in traffic on a highway. We hit mile after mile of construction where the slow pace gave us no relief from the hot summer air. Then dad began driving fast in order to hurry home. Mom grabbed her seatbelt to buckle up and did it so quickly she pulled a muscle; she exhaled the name “James” with an air of aggravation. By the time we pulled into the driveway at home we practically fell out of the car onto the green grass of home. Mom and dad didn’t say a word to us. We all knew to take our own bags and go inside to bed.

Years passed without a mention of that vacation. Then one night after my sister and I were out of the house and married we were at home for a visit with the family. I think it was Christmas time. It was either my sister or I who said, “Do you remember the vacation where all we had to eat was salt water taffy?” After that, it became the most talked about vacation in the years to follow. We look at the picture and laugh at the predicament we were in. One glance of salt water taffy and we laugh or roll our eyes.

With a family of my own I can now relate to the difficulties of carting a household on the road and providing for them. Often vacations don’t turn out how we planned and we often come home exhausted and angry at each other. But sometimes the adventure comes when you look back on the memories. Events ripened over time either become comical or endearing. Life really is an adventure. Live. Laugh. And eat Salt Water Taffy along the way.

author of The Common Hours

One thought on “The Great Misadventure of Summer 1985”

Flock of sheep on Last Dollar Road.
Partly cloudy and perfect. Rico, CO.
A wet monsoon this year in Arizona means a lot of little yellow moths on the flowers. There are so many beautiful things to “focus” on.
Light and clouds in the mountains.
A view from San Sophia Station, CO.
Early morning light. Telluride, CO.