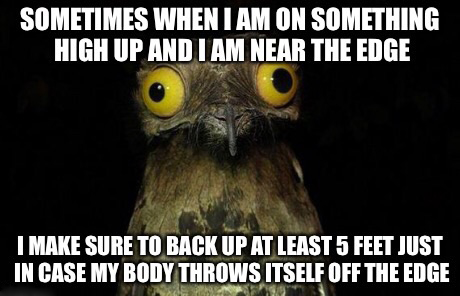 I grew up afraid of heights, any heights; I couldn’t even climb a ladder without feeling dizzy. In the late 1990’s my husbands family met at Disney World for a family reunion. When we visited the Swiss Family Robinson treehouse, I siezed up with fear by the time we reached the second story. It was a busy day with people patiently waiting behind me to move forward. Too overcome, I ashamedly tracked back down the treehouse past the endless line of people who had to let me sneak past them. I was beyond embarrassed.

Years later in 2001, after my husband and I moved to Phoenix, I hiked a small mountain, called Lookout Mountain. My fear of heights made it impossible for me to reach the top. Tired of this fear, I returned to Lookout Mountain almost daily, climbing further up the mountain each time, getting more comfortable with my surroundings. Eventually I reached the top and tagged the metal post on the peak. That was the beginning of conquering my fear of heights. It was earned one step at a time.

I’ve been thinking a lot about Courage this year and the mountains we face. I used to think that courage was a lack of fear, but without fear we would not need courage. Being stubbornly independent by nature, I like to think I can push my way through any problem or season in life. I feel strong when I’m healthy and multi-tasking and “successful” at what I’m doing. But as a human I am often reminded how weak I really am. I can touch a door handle with a virus germ on it and be sick in bed for a few days. Seemingly healthy friends have been diagnosed with cancer. Sickness and disease remind me how fragile the human body is. What about emotions? I tear up when people tell me their stories, and at baptisms and weddings, and movies. I can’t watch animal rescue advertisements, and I can’t watch videos of children who need homes, without crying. I can feel crushed when I’m called unkind names. I feel weak when I’m afraid.

I read a facebook post recently from a friend Kristina, whose 15 year old son is battling stage 3 cancer. I was struck with how she spoke of courage:

Life sometimes is more than we can handle. There are times when we “can’t do this”. But it is in those “can’t do this” moments when we find the very source of our courage. I want to share two more examples of people who have shown great courage in the middle of impossible circumstances to encourage you.

Nick was born with a rare disorder characterized by the absence of all four limbs. As a child, he struggled with his disability mentally and emotionally as well as the physical limitations it presented. At seventeen he started a non-profit organization, Life Without Limbs. Nick is now a worldwide motivational speaker bringing focus on life with a disability, and finding hope and meaning in life.

You can learn more about his story here:  http://www.lifewithoutlimbs.org/about-nick/bio/

Elizabeth Velasquez suffers from a congenital disease which prevents her from accumulating body fat. At 17 she stumbled across a YouTube video titled “Worlds Ugliest Woman” featuring herself. It was the lowest point in her life. She ultimately took up motivational speaking to help others with self-image.

Elizabeth started her own YouTube channel to teach others to be confident in their own skin. She currently has 240,000 subscribers and was asked in 2013 to give a TED talk “How do you define yourself?” in Austin, Tx which has over ten million views on YouTube.

When you wake up facing a mountain you can’t climb and you are paralyzed by fear, as my friend Kristina so eloquently said—

“I will do this for my son with the Lord’s grace and mercy surrounding me. It doesn’t make it any easier or less scary, but it gives me the confidence that the Lord has gone before me and is capable of doing great things!”

Author of The Common Hours

Layered composite story. There was a huge ring around the moon last night. No time to set up a tripod so I snapped it with my phone then had fun stacking layers. Do you ever see a moon ring and imagine it’s a wormhole you’re about to be sucked into? Imagination is joy.
What you’re afraid of today may not be the same tomorrow. I used to have paralyzing fear of heights. On a recent trip to Nevada I was able to do things I couldn’t before. Stairs to hieroglyphs, The high roller at 550’ and the bridge above Hoover Dam at 886’. I Still felt it but I wasn’t paralyzed. Oddly enough, getting a thyroid disease balanced out in 2001 seems to have quieted the alarm bells for heights.
Almost there. Salt River Preserve, Arizona.
We spent the afternoon near the Salt River .
Rocks are so interesting. Color, texture, shape. All of it. Valley of Fire, Nevada.
I spent the morning of my last day off, watching the hummingbirds at the feeder. Depending on the direction they face, Anna’s Hummingbirds have sequined colors that light up in the sun, especially the pink neck. It’s not easy to get the focus correct on them but it was fun to watch these amazing creatures.